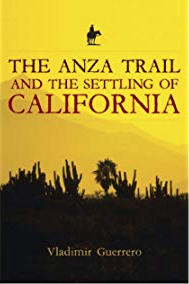 “Hospitality Above and Beyond”

On Sunday, I told the congregation that I was just finishing a book called The Anza Trail and the Settling of California, by Vladimir Guerrero. I had the opportunity to meet Vladimir and his wife Deidre in May at their home in the beautiful town of Lectoure in southern France while I was on my sabbatical. His son is Chris Guerrero, Kei and Penny Osuga’s son-in-law. Juan Bautista de Anza was a Spanish explorer in the mid-1770’s, who traveled on horseback from Mexico through Arizona and California. On his first expedition, de Anza traveled with soldiers, scouts and interpreters through unchartered and sometimes dangerous territories in order to find a route between the Mexico-Arizona border and the coast of California. On his second route, de Anza took 32 soldiers and their families to resettle in a place called San Francisco. Some of the missions, founded by Father Junipero Serra were already established along the coast, and de Anza spent time in many of them.

One of the things that stands out most for me in the book is the hospitality that was shown to de Anza and his fellow travelers in the various mission outposts along El Camino Real in California. When they would arrive at one of the Spanish missions, the bells would toll to celebrate their arrival; there would also be a special religious service; and then the hosts would throw a feast and offer the best of what they had. By the way, many of the native people of California were also extremely hospitable to de Anza and his party, and eagerly shared food, gifts, knowledge, and some of the indigenous people even journeyed with them to show them routes that they and their ancestors had traveled for generations.

Imagine traveling nearly 2,000 miles in new places days on end back in the time before there were roads, bridges, ferries, or rest stops. The travelers crossed deserts during hot days and lay awake shivering at night when they traversed snowy mountains. They sometimes had very little water; sometimes they had barely enough food to survive. Imagine finally arriving at a mission outpost after weeks of traveling like that and being welcomed with open arms. Imagine the mission bells tolling to greet your arrival. Imagine people celebrating that you are there. And imagine a great big feast!

This “above and beyond” kind of hospitality is the same theme I see over and over again when I read the stories in the Bible. And that is certainly the theme and the context for Sunday’s Old Testament reading in Genesis 18. When you read chapters 18-20, there is no doubt that hospitality is the overriding theme, and Sodom was most likely destroyed because the people of that city intended to harm the strangers that came to their town rather than offering hospitality, as Lot and his family did. At some point in time, for some reason, many people in the Christian Church decided to ignore the clear theme of hospitality and decided that today’s passage is about homosexuality. They decided that the sin of Sodom was not the lack of hospitality but rather homosexual behavior. In fact, the word “sodomy” comes from this passage. It is all based on one word: the word “know.” The men of Sodom told Lot to bring his guests outdoors “so that we may know them.” It is clear from the passage that the men of Sodom meant to do harm to the strangers. It is clear that violence was their intent. Perhaps sexual violence was in their plans, but there is no question that the men of Sodom meant to hurt the visitors who were in Lot’s house.

This passage lines up with so many others in the Old and New Testaments that God is so very happy when we show “above and beyond” hospitality to people who show up at our doors, in our communities and on our nation’s borders. May God guide us as we figure out how to best do so.

Click HERE to see a video of the message from Sunday morning. You may see the Koloa Union Church YouTube channel to see many of his past messages and subscribe in order be notified when a new message is posted. Please share these videos with friends and invite them to church. Please feel free to “Like” any of the videos you see and share them on social media, such as Facebook, so that others will notice them.

“A Message from Kahu Alan Akana” is provided most weeks by the Kahu (Pastor) of Koloa Union Church, an Open & Affirming (ONA) congregation of the United Church of Christ (UCC), a member of the Kauai Association and Hawaii Conference.