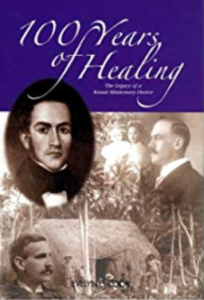 Mission Station and Church During the 19th Century

In 1834, the Reverend Peter Gulick traveled from Kauai’s first mission station at Waimea  to establish the second mission station in Koloa. The congregation was organized in April 1835 with twelve members, the same year as the first sugar plantation was founded in Koloa. Initial services were held in native grass houses. Later in 1837 a new large meeting house was constructed, and the membership soon increased to 125. Rev. Gulick also helped to organize the Protestant mission schools on the island in 1841 in order for children to attend daily classes for the first time.

The early missionaries were determined to care for the physical as well as the spiritual health of the Hawaiian people. In 1837, the Dr. Thomas Lafon joined the mission station in Koloa. Dr. Lafon was succeeded in 1842 by Dr. James Smith who, with his equally devoted wife, lived the rest of their lives in the service of Koloa and the island of Kauai. Dr. Smith also made regular trips to the island of Niihau to provide medical assistance. In 1854, Dr. Smith was ordained as a Christian minister and formally installed as pastor in Koloa. His ordination to the Christian ministry was the first on Kauai. His parish extended from Koloa to Wailua on Kauai’s eastern shore. Dr. James Smith’s son Jared left Kauai to be trained as a physician in the United States and returned to Koloa where he served until he died. James’ grandson, Dr. A. H. Waterhouse, also later served as a physician in Koloa.

After a storm in 1858 destroyed the church building, materials and funds were collected to reconstruct the church. The Missionary Herald of 1860 recorded this new church as “standing on high ground and seen far out at sea, forming a landmark for ships approaching the port.” This building served the congregation for over 70 years.

Changes During the 20th Century

Even though doctors brought the finest medical attention available to Kauai, the Hawaiian population continued to decline. In the meantime, other ethnic groups migrated to the island. Through the years, plantation managers made arrangements to bring in people from Puerto Rico, China, Japan, Portugal, Korea, and the Philippines to work in the sugar and pineapple fields. Eventually, separate Protestant services were held in Koloa in Hawaiian, English, Japanese and Filipino.

Bringing together people of various ethnic backgrounds, Koloa Union Church was formally organized in October 1923 with twenty-four charter members. A constitution was drawn and accepted. The church became affiliated with the Kauai Evangelical Association. In 1928 the church was remodeled through the generous donation of Mr. G.N. Wilcox, one of Kauai’s leading citizens. A lease for the land was made by the Hawaiian congregation to Koloa Union Church for 25 years. A separate church and a parsonage was built by Mr. Wilcox for the Hawaiian congregation who wanted to conduct their own language ministry. A centennial service, commemorating the hundredth anniversary of the founding of the Koloa Mission was held by several congregations on July 28, 1935.

From 1907 until his death in 1948, Dr. A. H. “Herbert” Waterhouse served the community as a physician, in the footsteps of his grandfather,  the Rev. Dr. James Smith, and his uncle, Dr. Jared Smith. After the twenty-five year lease of 1928 for the land from the Hawaiian congregation to Koloa Union Church expired in 1953, Koloa Union Church moved next door to its present location to the fellowship hall where meetings were held.

In 1959, the church council approved plans to build a new sanctuary with an adjacent multi-purpose building for education and fellowship. Under the leadership of the Rev. Susumu Yamane, the members made a three-year pledges towards the project. On January 29, 1961, the members of Koloa Union Church voted to be affiliated with the United Church of Christ. On July 16, 1961, the new sanctuary and educational building were dedicated. The total cost amounted to $57,000. The church sanctuary was named in memory of Dr. A. H. Waterhouse. The multipurpose building was named in memory of Mr. Walter C. Moore, a layman in Christian education who spent many years working with the youth of Koloa and the island of Kauai.

The Koloa area, especially Poipu, developed into a major tourist destination area by the end of the century. People from all over the world came as tourists and many decided to make the south shore their permanent home. Koloa Union Church saw changes in the profile of its membership and attendance as it became quite diverse with long-established and recent local families, as well as seasonal residents and tourists.

Growth in the 21st Century

The past two decades have seen significant changes in the community and church. The permanent and seasonal population, as well as number of tourists, continue to increase, which has led to more visitors and greater cultural diversity in the church. In 2014, the congregation adopted a new mission statement, which included a commitment to embrace its Hawaiian identity while intentionally inviting and welcoming everyone. The congregation also decided to affirm its commitment to serving the broader community by opening up the facilities for community groups as much as possible.

However, little attention had been given to the building and grounds. The Rev. Dr. Alan Akana arrived as the kahu (pastor) in 2014 and led the congregation through a visionary capital campaign. The church raised over $425,000 in order to expand the sanctuary and make additional major changes to the sanctuary, fellowship hall, entryway, parking lot and landscaping. The campaign also allowed the congregation to replenish money borrowed from endowments and to build up its youth fund.

As part of its commitment to share aloha with everyone, the congregation also voted to become an official Open and Affirming congregation of the United Church of Christ, publicly stating that all people are welcome, including lesbian, gay, bisexual, transgender and questioning people. As the church approaches the beginning of the third decade of the millennium, attendance and giving have increased, and the church members are focusing on outreach to people in the community and the world.