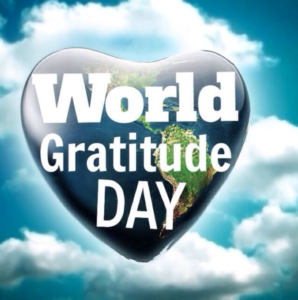 Gratitude: More Than a Feeling

On Sunday, I shared a story from Diana Butler Bass’ most recent book, Grateful: The Transforming Power of Giving Thanks. Diana was working as a professor of religious studies and history at the college where we both attended as undergraduates. She enjoyed her job and did good work. However, she wasn’t treated very kindly by some of the other faculty at the college. She also felt that some of the expectations of the college administration in regards to theology and personal piety were rather stifling. One day the President of the college called her into his office and told her that she was simply not a good fit for the school. He told her that she was being “let go,” even though he admitted that she did wonderful work and was an excellent teacher. Before she walked out of the room, he said to her probably the last thing she wanted to hear. He said: “One day you will thank me for this.” Let me just say that she was not having any feelings of gratitude towards him at the moment!

About a week later, Diana told a friend about it. She said, “Can you imagine the nerve of him? That one day I’ll thank him?” After her friend listened to her, he gently said to her, “You know, he’s right.” He went on to tell Diana about a similar situation when he was fired, and how he eventually thanked his boss who fired him after he learned gratitude. Diana was surprised to hear that gratitude was something that could be learned. She asked her friend how. He invited her to thank God for one thing every day and write it down in a journal. Diana kept that journal for 3 years! At first she wrote down one blessing each day, no matter what—something for which she was grateful. Soon, she was writing two or three things. Then more. And then, here is what eventually happened (in her words):

A larger narrative emerged; what had begun as a period of difficult personal crisis wound up being a time of profound happiness, deepened courage, and new self-awareness.

Diana reminds her readers that gratitude is not just a feeling; it is also a way of life; it is how we live our lives; it is what we do; and it is developing practices that invite gratitude to enter us and change us.

I invite you to practice gratitude this week. As Diana’s story indicates, gratitude is something we can do even during the dark and difficult times in our lives. Simply saying “thank you” on a regular basis can change your life for the better. I was pleased to learn that World Gratitude Day is this Friday—a time when people all over the world pause to give thanks for their blessings and also consider the abundance of the universe and give thanks that there is more than enough for everyone.

Our Kahu (Pastor) offers a weekly message in church most Sundays during the year. Click HERE to see a video of his message from this past Sunday. You may see the Koloa Union Church YouTube channel to see many of his past messages and subscribe in order be notified when a new message is posted. Please share these videos with friends and invite them to church. Please feel free to “Like” any of the videos you see and share them on social media, such as Facebook, so that others will notice them.