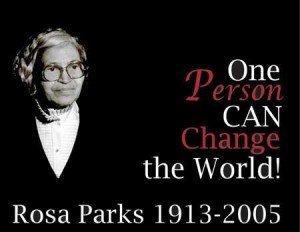 Since we were celebrating Martin Luther King Day on Monday, I decided to share the story of Rosa Parks during my sermon on Sunday. Most of us know that Rosa Parks is the Black woman who refused to stand up on a city bus in Montgomery, Alabama, and give her seat to a White person. She had actually been sitting in the “colored” section of the bus, exactly one seat behind the “colored” sign. However, after one particularly busy stop, there were people standing in the aisle, including a few White people. So the bus driver told all of the Black riders in Rosa Parks row that they would all have to stand in order to allow the White people to sit. Three of them stood up, but Rosa Parks moved closer to the window and refused to give up her seat. So the driver called the police and Rosa Parks was arrested for disorderly conduct. Because of her simple act of civil disobedience, the American Civil Rights movement was given the energy it needed to end segregation not only on buses, but also at drinking fountains, restaurants, schools, and neighborhoods.

One of the reasons I loved the story of Rosa Parks is because she was an ordinary person who made a big difference in the world. She was not a great public speaker and she didn’t have an exceptional education or resume; she worked as a seamstress in a department store and she struggled to make ends meet financially. Nevertheless, she acted out her convictions and courageously stood her ground. Her example inspires us because most of us consider ourselves pretty average and identify with Rosa Parks and other ordinary people. I think to myself: If such an ordinary person can make such a big difference, then perhaps so can I and so can you.

There was only one Martin Luther King, Jr., and we honor him for using his exceptional gifts. However, there were also thousands of ordinary people, like Rosa Parks, whose roles were also important in the Civil Rights Movement. I hope that we will honor them all, not only by remembering them but also by following their example and living by our convictions and doing the right thing even when it takes courage and faith.

Click HERE to see a video of Sunday’s sermon. Videos of Kahu’s sermons are available most weeks. You can find them on our  church website <www.koloaunionchurch.org> and on our weekly e-news. Please share these videos with friends and invite them to church. You can also subscribe on YouTube anytime you watch a sermon; that way you can easily watch any past sermon and even receive a notification when a new sermon is posted.