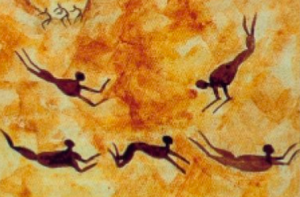 On Sunday, I shared with the congregation about one of my favorite movies, “The English Patient.” It is a fictionalized story of the Hungarian explorer Laszlo de Almasy (who spoke English, and therefore was mistaken as English in the movie). I talked about the real Almasy, who discovered the now-famous Cave of Swimmers in the desert of southern Egypt. It was a large cave with ancient paintings of people swimming. Experts believe they were painted some 10,000 years ago, during the most recent Ice Age, making them perhaps the oldest paintings ever found.

Laszlo suggested that many years ago the Sahara Desert must have once been a very green place with lots of water. Finding a cave with paintings of lots of swimmers was a big clue! However, no one seemed to take this new theory seriously. They couldn’t imagine the Sahara Desert as a beautiful, green paradise with lots of water. However, his theory was eventually proven true and believed by every legitimate earth scientist who knows the region. In fact, an Egyptian scientist in 2007 discovered a huge underground lake measuring over 30,000 square kilometers buried under the sand not far from the Cave of Swimmer!

Just as the earth can become very thirsty, we too find ourselves at times incredibly thirsty. As we consider the Samaritan woman in John 4, her thirst seemed all-encompassing: physical, social, spiritual and emotional. She thirsted for companionship and a sense of belonging, as well as water. Jesus told her that if she would drink from the water he offered, she would never be thirsty again. At first she disbelieved, but then she took him at his word and felt his love and acceptance—even though he knew all her secrets. It sounds to me like her thirst disappeared.